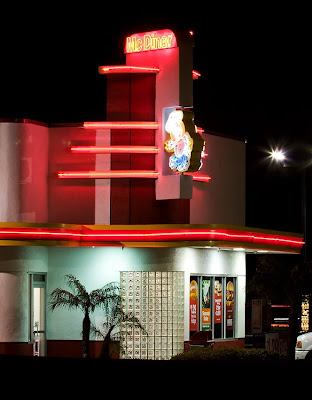 As promised, here's the expanded view of yesterday's photo showing the glass blocks.  It's the local McDonald's done in a retro 50's style and called a McDiner.  Along with the glass blocks are lots of neon and "Speedee" above.

There is a local connection to the McDonald's company here also.  In 1937, Patrick McDonald opened a restaurant called the Airdrome at the (now long gone) Monrovia Airport.  The restaurant was later moved to San Bernardino and renamed McDonald's.  Years later Ray Kroc bought out the business and turned it into the empire we know today.  While San Bernardino is considered the home of the first McDonald's, the roots go back to Monrovia. - Source: Wikipedia.

Pomona Public Library - A photo from the airport.

Keith said…
Thank you everyone! It's amazing the things I've learned just from taking photo's.

Thanks Skrip for answering Pas Adj's question so quickly. I've also added a few links to the post to provide some additional info and photo's.
March 2, 2009 at 4:29 PM

Tash said…
NO WAY! How cool is that. The original and right here in Monrovia. You did so well with the detail and then this brilliant night shot.
March 2, 2009 at 10:29 PM

Petrea Burchard said…
That is so cool, Keith! I remember in my hometown of DeKalb, Illinois we had a very early McDonald's. One of the earliest ones was in Des Plaines, Illinois. But I never knew the origins were here in Monrovia.
March 3, 2009 at 5:49 PM