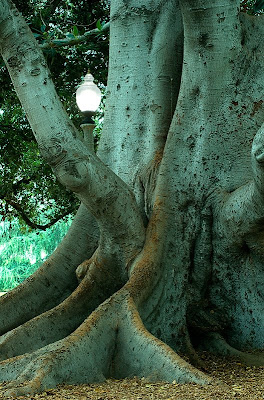 or, Lighting The Way Back To The Family Tree.

When I first started this photoblog, I thought that by putting a photo on the web everyday, it would force me to get out and take photos continually. I hoped that since the photos were public, someone might see them, they might leave a comment and that would motivate me to get better. That was about it.

At the time, I wasn't aware of the City Daily Photo group of photobloggers but shortly after I started, I got an invitation to join. That was the beginning of the end of my obscurity. After joining, the traffic to my site went up along with the supportive comments. I got visits and email from people around the world. Still, I never expected the email I received last February.

I received an email that started out: "I was looking through your Monrovia Daily Photos and it hit me... Could we be cousins?" She then went on to describe my family and the house I grew up in. It was my cousin Judy. She had been looking at her local Kyle Daily Photo, checked out other Daily Photo cities, saw Monrovia and my name and took a chance. After 40+ years. She had stayed with us when I was very young, too young to remember, so I called my sister who confirmed it.

We didn't see much of my dad's side of the family growing up, most didn't live here in California. I met a few during a trip to Chicago. I'm not sure I was even a teenager at the time. After my parents passed away, my sister and I pretty much lost touch with them completely. Now, I can look at a website with our family tree and see well over 100 relatives. New to me. Most of them I never knew. I'm sure there's many more not listed yet. Reconnected. All thanks to City Daily Photo and this photoblog.

Hello to all the relatives out there!
Email Post
Labels: Monrovia Nature

Tash said…
What a great, incredible story! Family reconnected thru City Daily Photo. I hope they write about that.
I like the visual with the tree and the light - very symbolic.
June 22, 2009 at 11:08 PM

Anonymous said…
And I agree with you -- I never guessed the connections I'd make when starting this blogging thing last summer. It was Tim at Altadenablog that first saw me, I think. Otherwise I might still be writing to myself
June 23, 2009 at 9:26 AM

Jane Hards Photography said…
That is the most amazing coincidence I have come across on the CDP.
June 26, 2009 at 11:46 AM

Paula said…
Great story, you just never know who will turn up when you put yourself out there. I like the lamp post too. In fact I have its identical twin right outside my apartment window.
November 4, 2009 at 11:42 AM

Anonymous said…
Good Afternoon!!! www.gemcityimages.com is one of the most outstanding resourceful websites of its kind. I take advantage of reading it every day. All the best.
December 30, 2009 at 10:55 AM