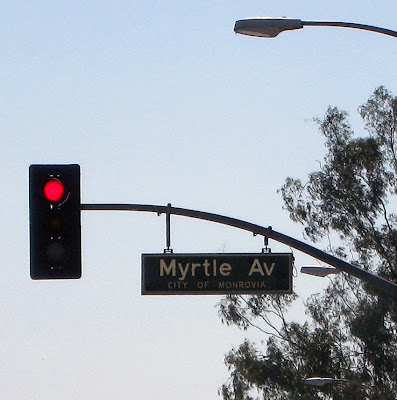 Time for a little Monrovia history about the naming of the city streets:
From the Monrovia Old House Preservation Group about the original Town of Monrovia Subdivision:

When the town was laid out, the decision was made to name the streets running north and south after flowers and the streets running east and west after nut and fruit trees. The exceptions were Myrtle, which though a tree, was also the name of William Monroe's daughter, and Charlotte (now Canyon), daughter of Colonel Samuel Keefer who owned several subdivisions in early Monrovia.

Only slight differences between the above two items. These days, in the whole of Monrovia, there are many more exceptions to those first street naming rules. I just wanted to point out, and this is where the photo comes in, that Myrtle is the name of Monroe's eldest daughter, a type of tree and a flower.
Email Post
Labels: Monrovia

Pasadena Adjacent said…
Thanks for that bit-o-(local) history. Much insight into the early development of a city can be understood through the street names it chose. Although San Marino may be a principality in Europe, the street names of San Marino CA. completely reflect a bias for high brow British literature. Exception being a few saints who landed in the mix. Where I live, across the way is "Easy" street. Wish we could all live there.
July 25, 2008 at 8:34 AM