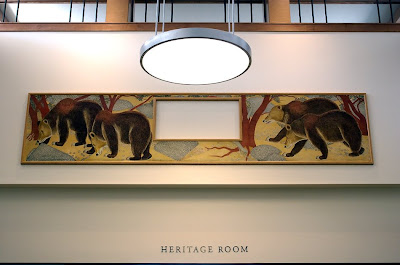 The mural had been stashed away in the basement of the post office since 1958. It was found again in 2004 and underwent restoration over the past 5 years.  That big hole in the middle?  It was painted that way.  According to the information at the library, the mural was painted in place above the teller windows of the post office.  The space above the teller windows, unfortunately, had a large air vent.  Since the vent couldn't be moved, the artist painted around it leaving the empty space seen above.

There's also a second painting of a mother bear, but that one is still missing.  Keep your eyes open, check your garages, it's out there somewhere.
Email Post
Labels: Animals History Info Library Monrovia

Anonymous said…
That is so fantastic Keith! You made my day. A great story.

Another similar story is the discovery of a Phillup Guston mural found in cobwebs (that was also a wpa project) at City of Hope a few years back
May 23, 2009 at 9:17 AM

Keith said…
Tash: The library is beautiful. There's a lot of refurbishment work and construction going on at the high school now. You can still see the front entrance and bell tower but there are temporary buildings and construction equipment just about everywhere else. The much needed improvements will be great when done, kind of a mess right now.
May 28, 2009 at 10:09 PM