Summer 2017 brings the return of Ghost Town Alive, a new show in the Charles M. Schulz Theatre and lots of live entertainment along with all the other shows and attractions to keep you busy. 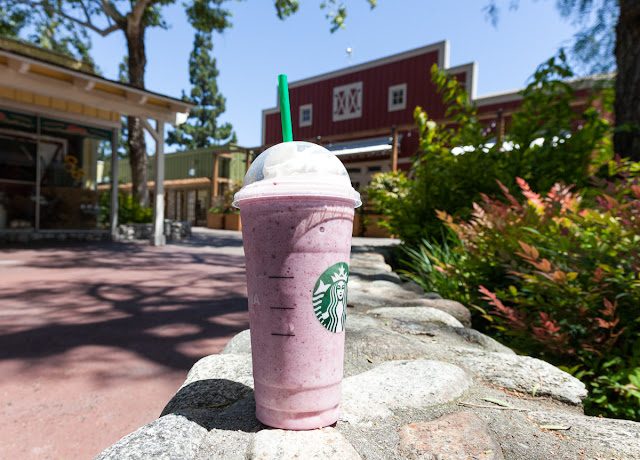 Since it's going to be a hot summer, I suggest starting off with something that is exclusive to Knott's Berry Farm: a Boysenberry Frappuccino!  This is available in the Starbuck's just outside the park gates in the California Marketplace area (the same area where Mrs. Knott's Chicken Dinner Restaurant and Virginia's Gift Shop, etc. are located).

It isn't listed on the menu so just ask for it. 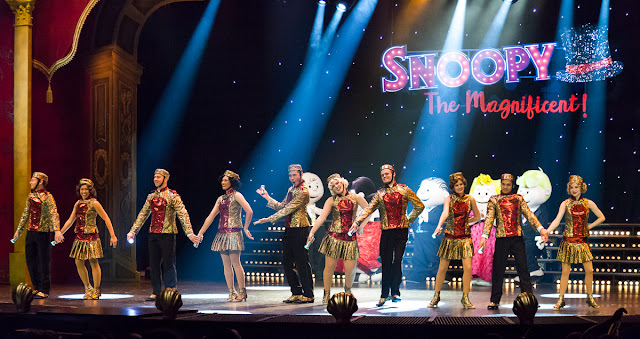 A new show this year featuring the Peanuts characters in the air conditioned Charles M. Schulz Theatre is Snoopy's Magnificent Magical Revue.  Takes the place of the ice shows of recent summers. 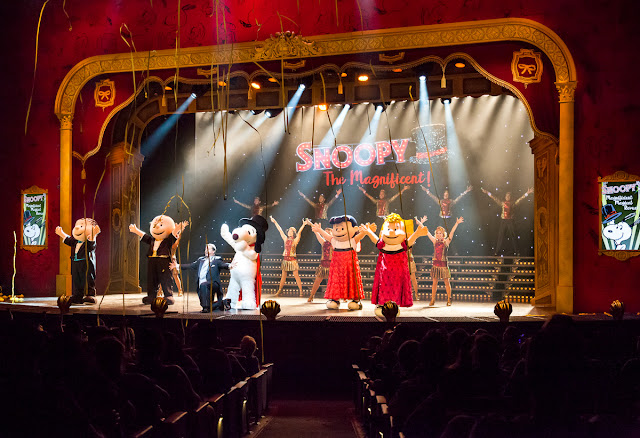 Magic, song and dance numbers and, of course, Snoopy and the gang. 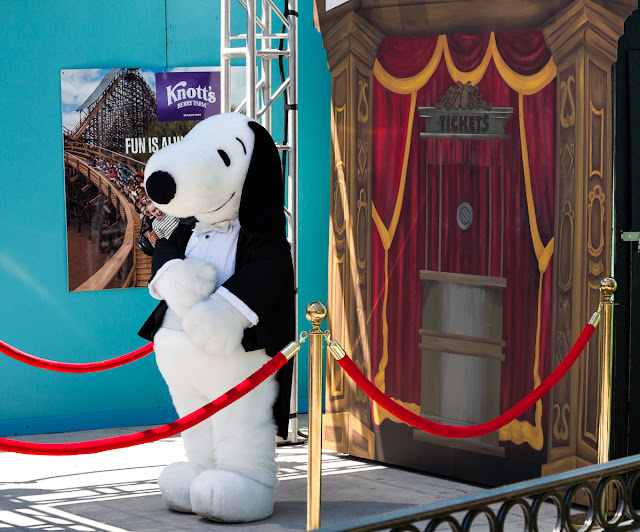 Speaking of Snoopy, a Snoopy meet and greet. 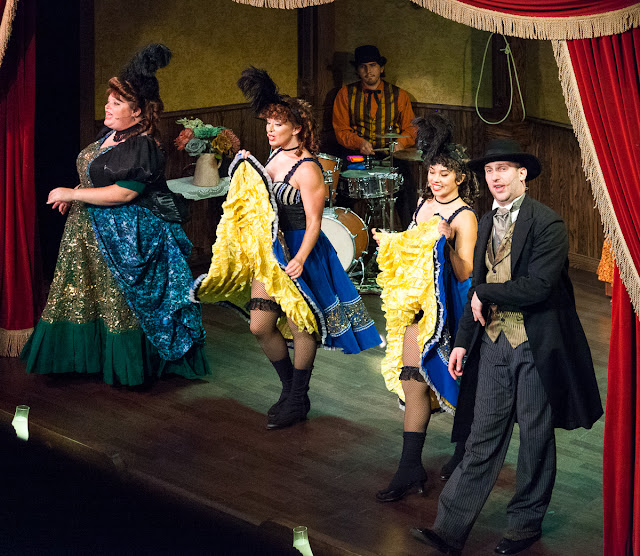 Inside the Calico Saloon is the aptly named Calico Saloon Show with performances throughout the day.  Will Dakota Dan propose to Cameo Kate?  Singing and cancan dancing. 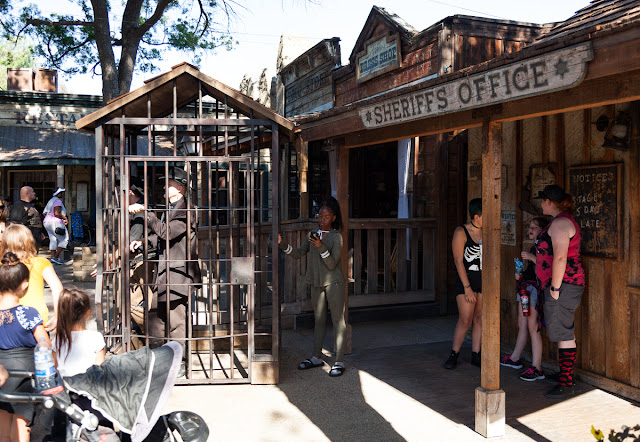 Above: A couple of the Mayfields spending some time in jail.

Ghost Town Alive returns to Calico Ghost Town for its second year.  Too involved for me to try and explain it, here's a link to info on the Knott's website.  Geared more for the younger crowd who always had a hankerin' to be a part of the old west.

An interesting part of Ghost Town Alive is that several of the peek ins (such as the sheriff's office, bank, barber shop, etc.) in Ghost Town are open to enter, explore and interact with the sheriff or proprietors inside. 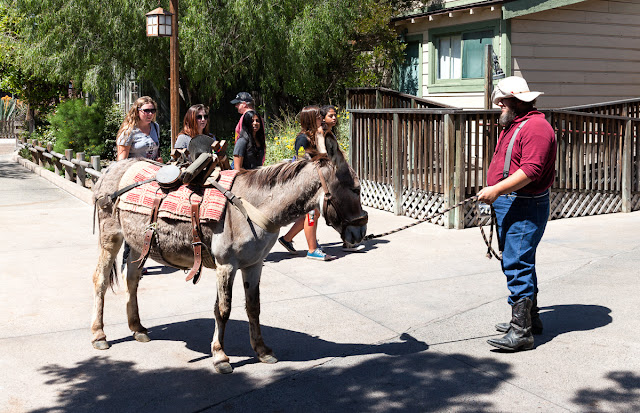 A couple of the residents of Calico. 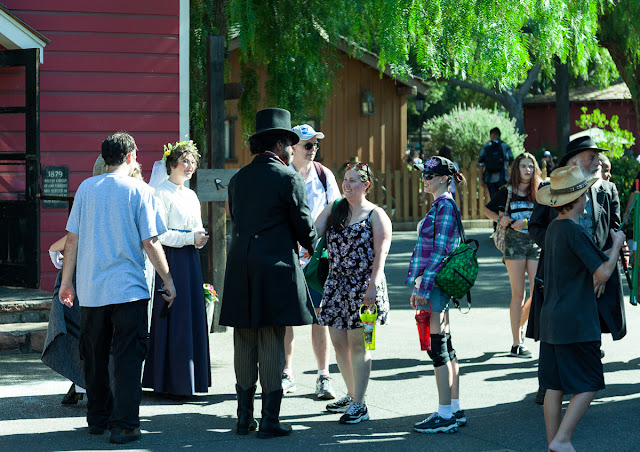 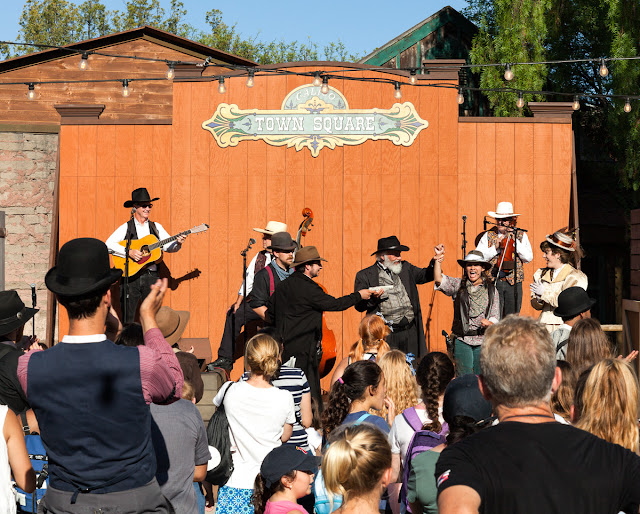 Ghost Town Alive is an ongoing story line and takes place every day from opening till 5:30 pm when the Founders Day celebration and hoedown is held.  Additional revelations take place till the very end.

The Ghost Town Miners provide the music for the hoedown. 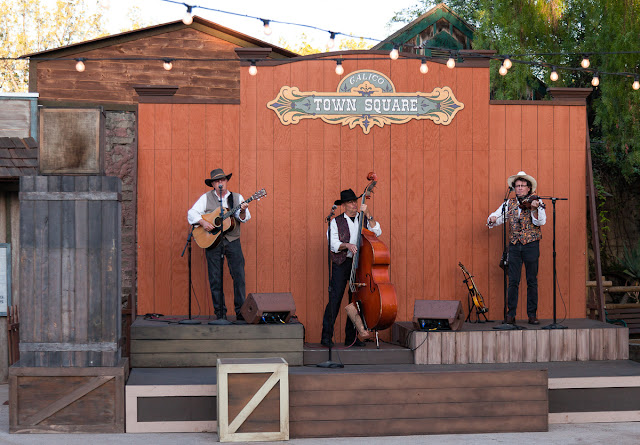 The Ghost Town Miners also get their own times to play music on select days throughout the week. 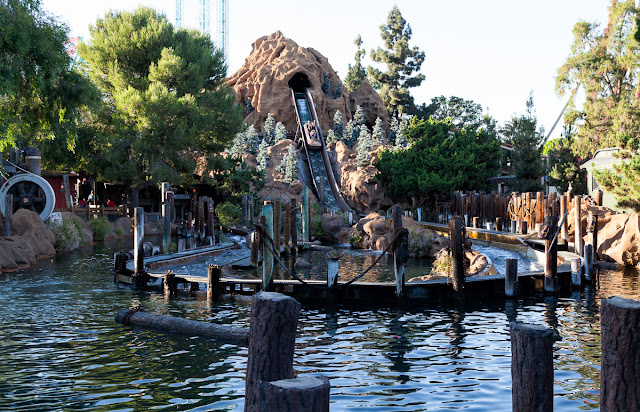 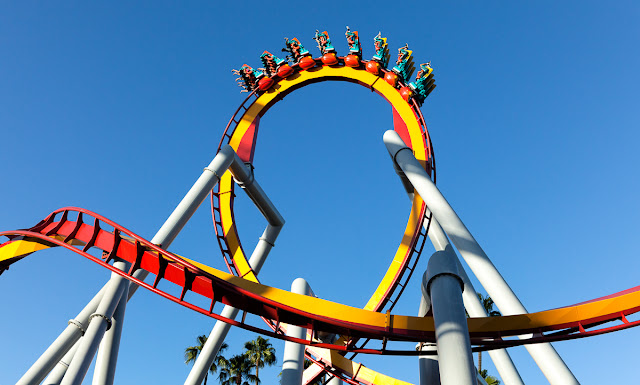 If thrill rides are more your speed, try the Silver Bullet roller coaster 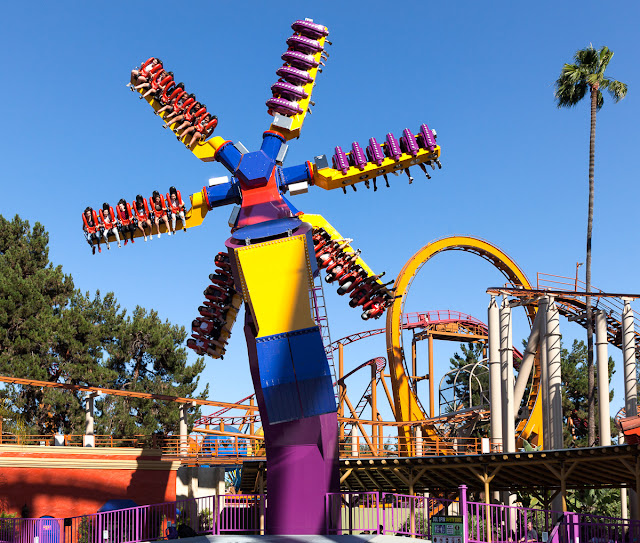 Or, how about the brand new Sol Spin. 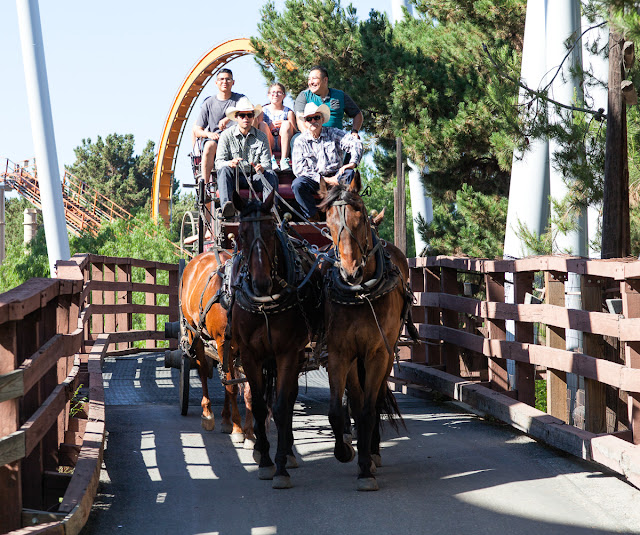 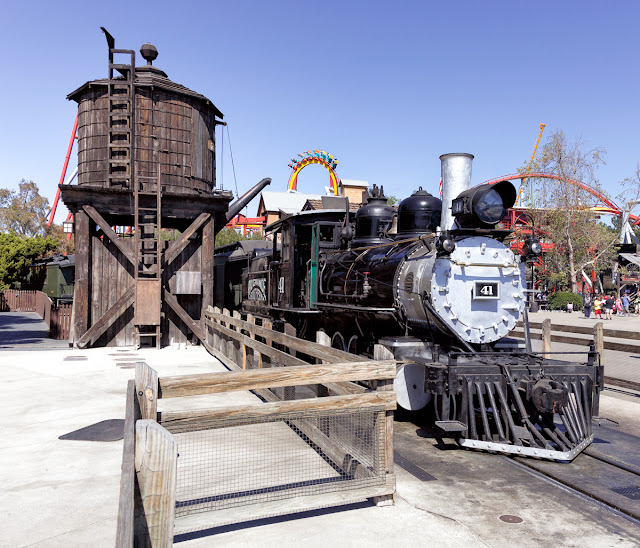 Engine 41 - the "Walter K".  Also plays an integral part in the nighttime "Circus Of Wonders" show. 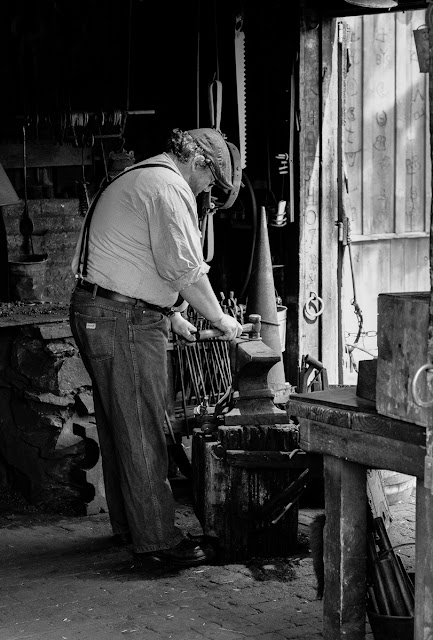 Have a custom horseshoe made by the town blacksmith. 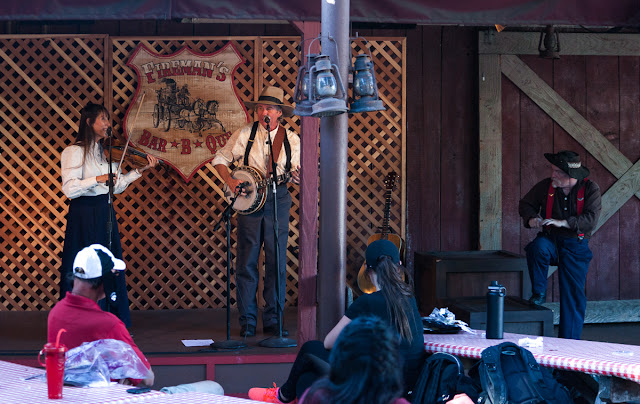 Above: Chaparrel with special guest Cannonball (far right) on the spoons.

Lots of live music throughout the summer from Rockabilly to Swing to Blues to Americana to Bluegrass to Salsa to Surf and more.  Bands, days and showtimes vary. 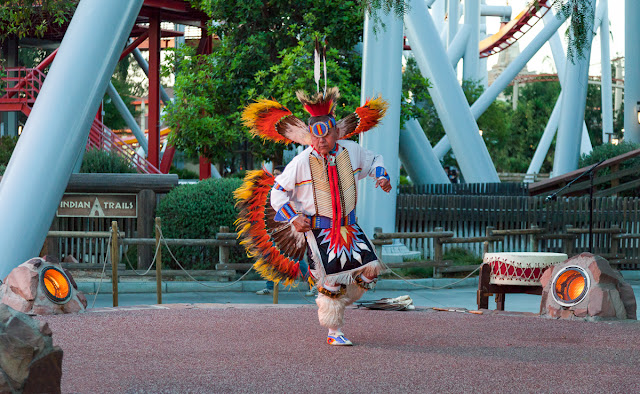 Native American history and dancer at the Indian Trails Stage. 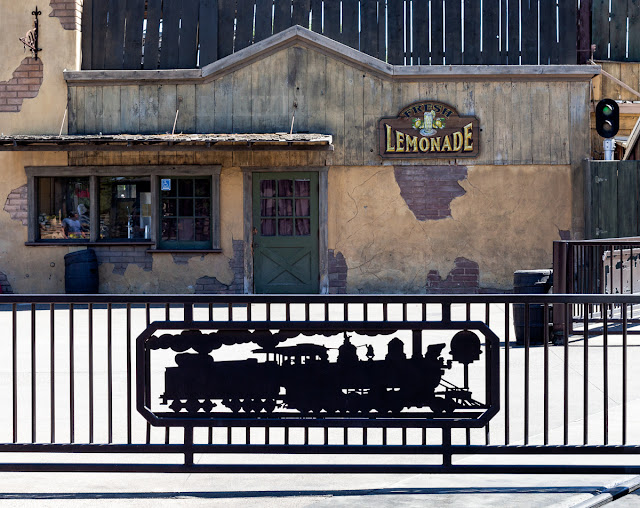 I included this because I've always liked this design on the metal gates at the railroad crossing in ghost town. 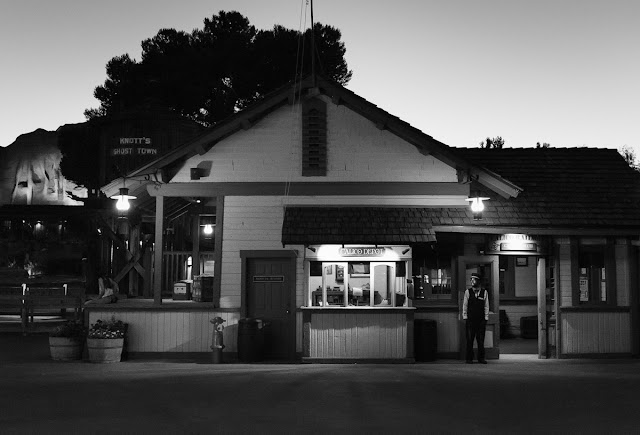 As night falls, it means it's almost time for the circus train to arrive with the Circus Of Wonders performers at the Calico Mine Stage. 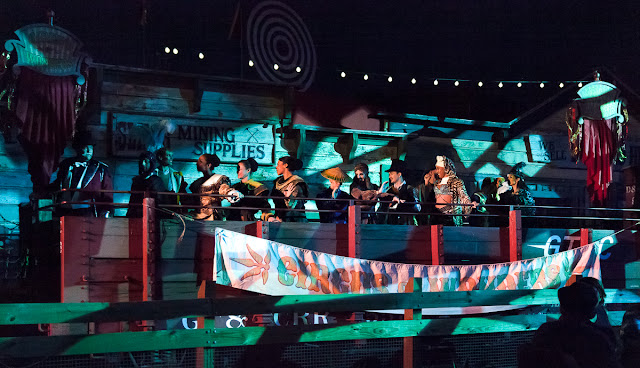 This may be surprising, but when the circus train arrives next to the stage, that is my favorite part of the entire day.  Let me try to explain why.  This is when Knott's takes the tools at their disposal (a full size steam train that perfectly travels adjacent to the stage, old west buildings backdrop to the train (including the mining supplies above), the lighting (which is darker than  I show in the photo above, the loud train whistle that starts it all in motion, the costumes, the walk from the train to the stage) all comes together to create a moment that truly blurs the line between show and reality.  It becomes difficult NOT to suspend disbelief.  No miniature train replica, no train whistle recording, not overly glamorous.  This is a train traveling from town to town stopping for circus performers to put on a show.  Truly captures what feels right.  Well done. 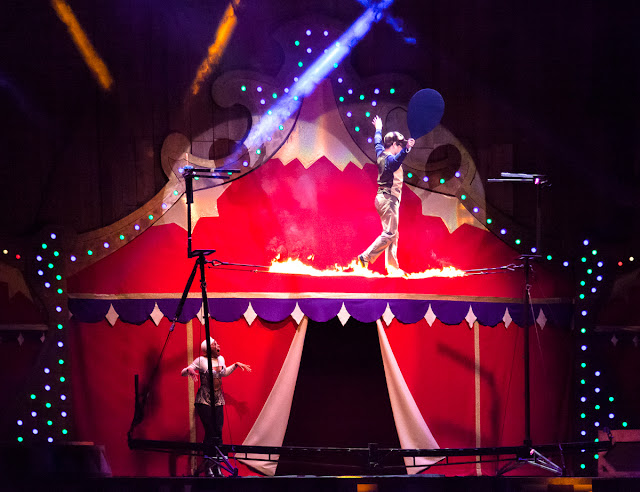 Above: making a tightrope walk more interesting by adding fire.

The show itself is great in its own right.  Very talented performers putting on a fast moving show. 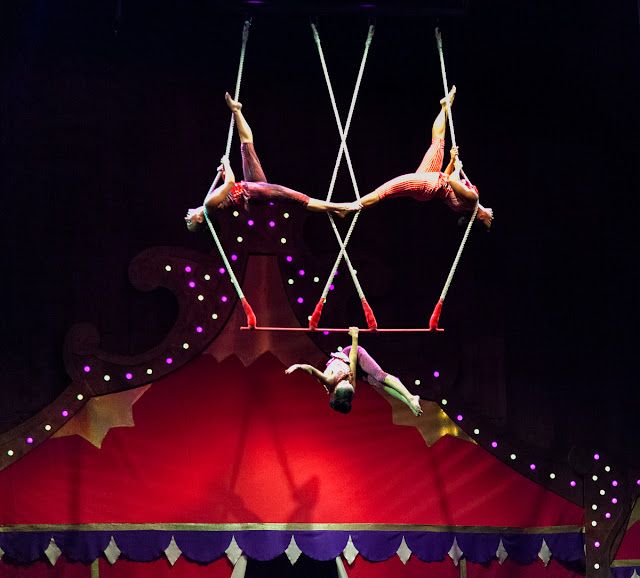 Olga, Bolga and Volga.  Triplets on the trapeze. 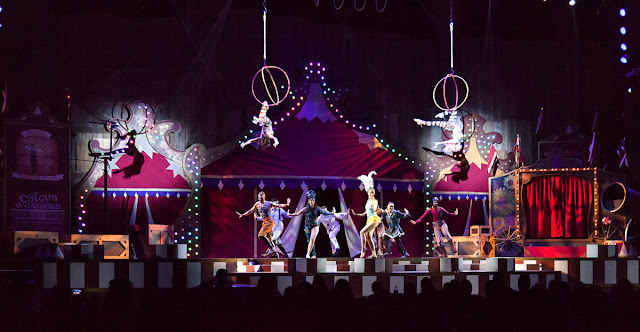 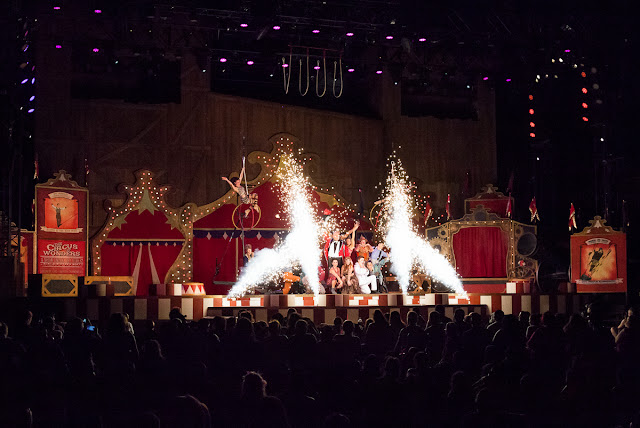 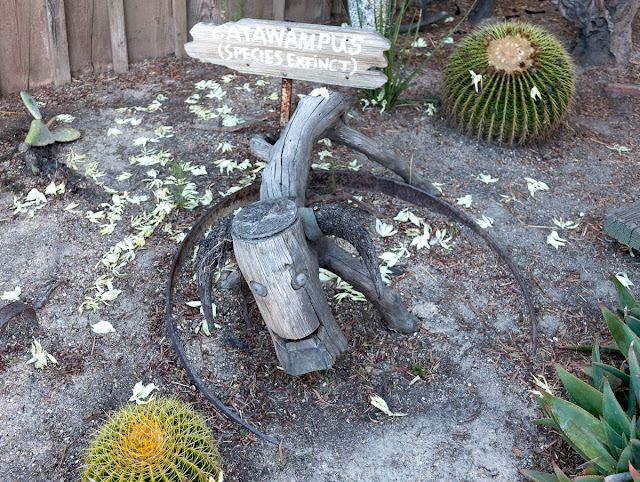 The day after I took this photo, the Catawampus above went missing.  I stopped by later that night on the way out and he was mooing like crazy.  I had nothing to do with the disappearance.

As I write this post, the Catawampus is still missing: https://www.knotts.com/blog/2017/june/6-16-17-catawampus-is-missing

This post ended up being a lot longer than I originally planned.  There is so much going on at the park, it could have been twice as long and still not covered everything.
Check out their website at www.knotts.com.  Look up info on Ghost Town Alive - it defies short explanation.

Thanks for stopping by!