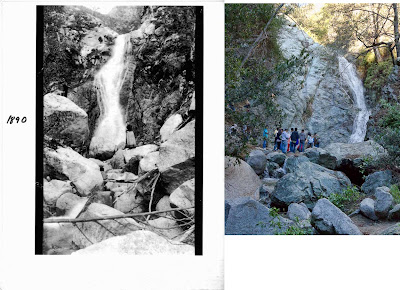 
It's not often I get access to a local photo from 1890 so I thought it might be fun to take a similar photo and compare the two.

The most obvious difference is the waterfall.  The whole area to the right at the top of the falls is gone and that completely changed the direction of the falls.  The midpoint of the waterfall has shifted at least 10 feet to the right.  It used to fall more towards the center in the current photo, right about into the center of the group of people.

Some other things that stood out:

-The lack of trees in the original photo.
-The changes in the boulders in front of the waterfall.  You can get an idea of their size by the people standing on them.  The changes may be as much or more from the building of the check dams as from the flow of water off the waterfall.
-The difference in the way people dressed to go hiking then and now.  Click on the image to get a better idea.  The woman in a long skirt down to her ankles. The men in coats, vests and hats.
Email Post
Labels: History Monrovia Monrovia Canyon Park Nature Parks

Pasadena Adjacent said…
I didn't catch the hikers in the b / w until you pointed it out. Somewhere in my digital archives I have a photo of Eaton Canyon waterfall taken by Pasadena local Virginia Hoge great grandfather. Wherever did you find this image? Marvelous post
January 5, 2011 at 12:44 PM 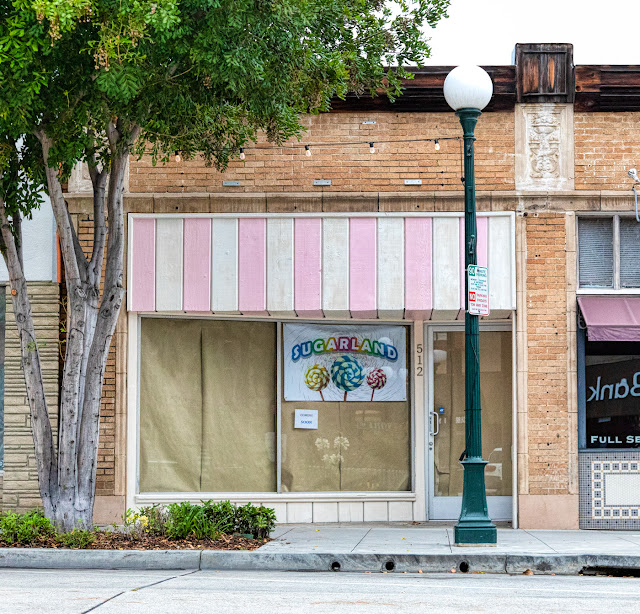