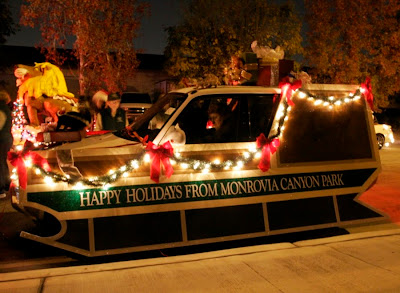 This is what the teaser from yesterday was about.  The Monrovia Canyon Park entry in the 2009 Holiday Parade.  Unfortunately, this is a Gem City Images exclusive.  Just as the parade was starting, the strings of lights along the sides went out.  No one on the parade route got to see it just like this.  Quite a success nonetheless.

FYI: That large lion on the left was part of a different entry.

New computer on the way.  More photos from the parade, the new fountain (yes, it was unveiled just before the parade), the city Holiday(?) Tree and more from this night will appear then.
Email Post
Labels: Animals Events Holidays Monrovia Monrovia Canyon Park Nature Parks

Keith said…
Altadenahiker: It is low tech and definitely for the kids and the families.
December 5, 2009 at 4:43 PM