Pop Quiz - Which One Is Monrovia Peak? 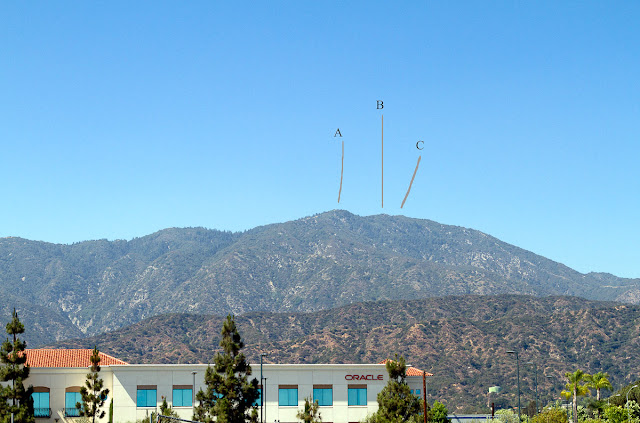 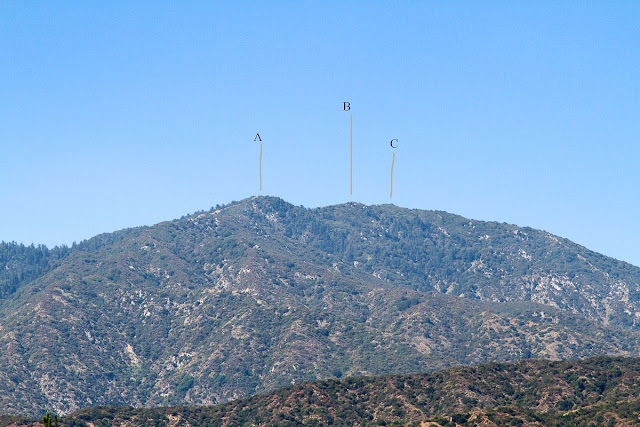 The answer to the quiz, as Anonymous correctly guessed, is "C".
Although it doesn't look like it from down here in the city, Monrovia Peak is also the highest of the 3 peaks at 5,409 feet.

Peak "A" is Rankin Peak, named after the Rev. Edward Payson Rankin. From the city it looks to be the most prominent, but it is the shortest of the 3 peaks at 5,290 feet.

Congratulations to Anonymous for the correct answer!

Thanks to Dan's Hiking Pages for the peak elevations.

The first photo is a wider view to provide some context to the area and the peaks in the quiz.  The second photo is a closer view of the three peaks to choose from.

There is a Monrovia Peak above the city and it is one of the three identified in the photos. The question is: Which one is Monrovia Peak?  A, B or C?  Any guesses?
Email Post
Labels: Monrovia Nature Places

Elizabeth Chase said…
Whenever I look at a map, it seems like we (near Mayflower) are between Mount Zion and Mount Bliss. I've never seen a Monrovia Peak on the map!
July 17, 2012 at 10:23 AM

Keith said…
Elizabeth: One of these really is Monrovia Peak! Take a guess, you've got a one in three chance.

I'll give the answer tomorrow. Is Anonymous correct or is it A or B?