From The "You'll Never See This Event Again" Files 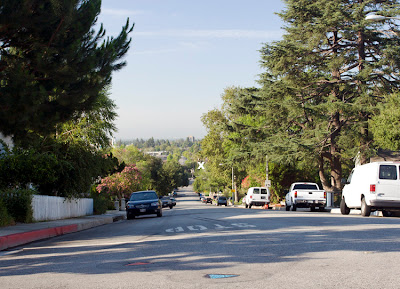 A long, long time ago when I was a little, little boy, Monrovia had an event that brought out many of the residents to watch.

The photo above is of Madison Ave. looking south from Hillcrest. The white "X" (middle of the photo, just below center) is the approximate location of a gas station on the southwest corner of Foothill Blvd.

I don't know why this event took place and I've never heard of anything like it, but here's what happened:

On the east side of the gas station, in an open area away from the gas pumps and the building, a large block of ice was positioned on the ground. When I say large, I mean that it was much larger than I was in every dimension. Large enough to stop a car (hint, hint). There might have been 2 blocks, my memory is a little fuzzy on this.

Up at the top of Madison (where the photo was taken from), an old sedan was revving it's engine, ready to speed down the hill. People lined both sides of the intersection, wondering if the driver was really crazy enough to do what it looked like he was going to do.

Then the car started to move. The driver wasn't tentative, he accelerated the entire way down, crossing the intersection, up the entry to the gas station on the east side and head-on into the ice. That was a sound I'll never forget. Witness to my first car wreck. Ice was everywhere. Big chunks, little chunks, some as fine as snow. My parents let me walk around in it a little while and pick up some of the pieces of ice. What a mess. We checked out the car. Also a mess. It would never do that again.

Like I said, I don't know why someone would crash a car into a block of ice, but I remember thinking it was pretty cool.

Being so young at the time, I'll be the first to admit that my memory for the details is shaky at best. If anyone out there remembers it better than I do or has some more information, I'd love to hear it.
Email Post
Labels: Events Monrovia